The Biblestudents encountered already many problems in France and were forbidden to teach or preach in public. The Catholic church did not have any problem because many in France consider themselves Catholics. Lots of those Catholics protested against the Muslim community growing in their country, never questioning why so many where leaving the Catholic faith and found themself disillusioned and cheated by that big organisation, which claims to be the true religion.

The last few weeks many of those French were calling blue murder and wanted a ban on everything that smelled to Islam. By doing so they got the clear thinking minds also in their back-garden, because lots of French want the burqini (burkini) banned in France. (Some other countries want to follow suit.) Though several people noticed also that the burqini was covering less of the body than certain habits of Catholic clergy. So why would the French police allow nuns to go in the sea with their habit but humiliate Muslim women dressed in a fashionable swimwear called burqini (burkini)?

Several French people shouted that burqini’s to be dangerous clothing (?!?) that should be forbidden. We wonder what could be so dangerous about that attire. The Catholic nuns and priests have much more space to hide dangerous weapons or to wear bomb belts than those women who wear a burqini.

Now it came to happen what hung already some time in the air. It was clear that the governement not only wanted to get the attention away from her inability to protect the French people, they also would love to get any form of religiosity out of their community.

As citizens of a country one would expect the interior ministry’s responsibility to guarantee security and to decide the severity of responses which however must never become provocations that could potentially attract attacks. The governement should do everything to have the different groups of people, from different origin and cultures, living together in unison. but now it looks like the governement does everything to put oil on the fire and to get as many people against each other.

In name of secularism the French governement decided to abandon any religious sign/symbol or religious badges in public places, and as such does not want their citizens to show in their clothing what they believe. Christian youngsters who previously wore fishes or crosses, yarmulkes, scarves or any other religious clothing shall shall not allowed to enter the school because it is now prohibited in the schools, which started today.

Clearly there are many Europeans who, seemingly sincerely, think women are not strong enough to decide for themselves what for sort religion they want to belong to or what sort of clothing they want to wear.

Striking is it that mainly men have the greatest objection to those Muslim women wearing covering clothes. Though also several Western women do not want to accept that those European ex-Catholics can make up their mind for themselves and decide for themselves which religion to belong to and what to wear. 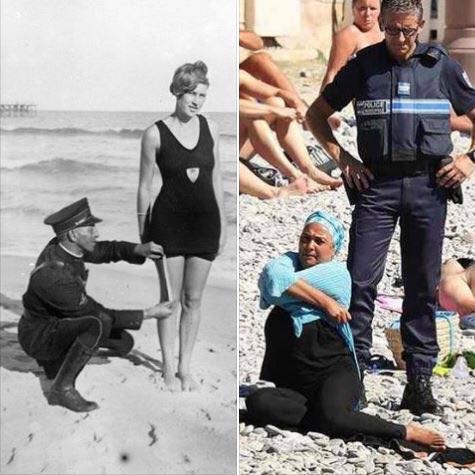 A woman’s swimsuit measured in the name of modesty (1925); woman forced to undress in the name of liberty (2016)…as seen in “Men Won’t Stop Controlling Women’s Dresscode” by Nuha ElZubeir, Identity Mag.

Some decades ago women were penalised when they had clothing on, which showed some bare legs or arms. We ourselves knew our parents to wear covering swimwear and many of us had problems when they wanted to run outdoors with sleeveless shirts or short trousers. Now half a century later it looks it has to have come the opposite, when somebody wants the body covered he or she is looked at as doing something wrong. In France it has even become so far to call the covering of body parts indecent and against morals and French values.

Has it become that French morals today dictate that men and women should have as much as possible bare body parts, though not fully naked, because that would take the sensuality away and would make everybody the same. They prefer that the nudity is accentuated but not hidden. When hidden, it proofs today, then the French are getting uneasy.

French men seem not to like it when a woman wear what she wants. They do not seem to believe a woman is capable of that. As soon as a woman prefers certain body parts covered they call it her being oppressed by some one else (her husband, her parents, her religious leader). They do not seem to see or to understand, that such woman perhaps can be much stronger than all those who follow the fashion magazines and always want to be by the time wearing the latest hype.

Well this time they also have a hype. All the smear campaign made that the sales of the burqini are booming.

Hopefully lots of women also dare to show that they are themselves able to decide what to wear, what to show or what to hide of their own body, that is their own property and not the property of the onlookers at the beach or on the street. For a woman to be in charge of her own body, that seems to be a big problem in the macho world of the so called land of liberty, freedom and equality.

Two young Muslim women in the heart of Istanbul are having “an Apple” for lunch. This photo was taken on a sunny day in April 2007.. (Photo credit: Wikipedia)

When women would be equal, why want they listen more to them who can speak for themselves? Why do they not want to believe them?

For those who are Catholic or for those who say they are Christian, they should be aware that Jesus had a loving spirit for all around him and did not show favouritism to those who would have been dressed in such or such a way.

In the Tanakh, Messianic Scriptures and in the Quran, the Divine Creator of everything, Allah, the God of gods, the Elohim Hashem Jehovah, demands of those who love Him, to love their neighbour as themselves. God demands those who love Him, to respect all creatures God allows here on earth. As such God demands from believers in the Almighty to respect other believers, even if they are heathen or do not want to know anything of God.

We also should recognise that those shouting and saying their concerned about their values, are having the wrong values, because covering body parts is more ethical and respectful than to flaunt with naked body parts.

Find also to read about the burqini or burkini:

Comments on: "Secularism in France becoming dangerous for freedom of religion" (10)

Repentance for forgiveness of sins has to be preached to all the non-Jews in Christ Jesus his name, who gave to us the ministry of reconciliation.

Not every covenant that God made with His People is to be viewed as having no limit in time, but that which was bought at a heavy price is sealed with blood forever. The prime necessity of human race, salvation from sin and death, has been provided in the divine purpose and solved by the sent one from God, who was willing to put his own will aside to do the Will of his heavenly Father, and gave himself as a ransom for all people.