MT9:18 While Jesus was speaking these things, look! one of the rulers[1] approached him and prostrated himself by bowing to the ground,[2] telling Jesus,

“My daughter has just died but come and touch her and she will live[3] [again].” 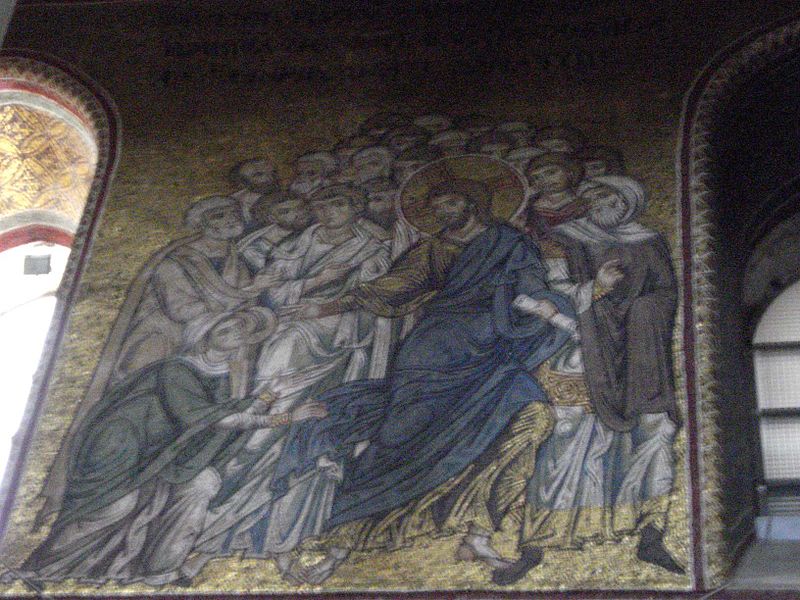 MT9:19 And so Jesus rose and with his disciples he followed the ruler. MT9:20 And, look! a woman suffering from a twelve-year hemorrhage[4] approached Jesus from behind touching the fringe of his outer-garment.[5] MT9:21 She had told herself,

“If only I might just touch his outer-garment I shall be saved.”[6]

“Courage, daughter, your faith has saved you.”

And in that hour[7] the woman was saved. MT9:23 Finally, Jesus came into the house of the ruler and when he saw the flutists and the crowd making an uproar,[8] MT9:24 he told them,

“Everyone, go outside, for the little girl is not dead[9] but sleeping.”

These people were disgusted[10] and laughed at Jesus. MT9:25 But, when the crowd was pushed outside Jesus took the hand of the little girl and she rose. MT9:26 Thus, Jesus’ fame[11] spread throughout the whole land.[12]

[1] Rulers: The Greek is ARCHON and is variously rendered: NASB: synagogue official; TCNT: President of a Synagogue; RIEU: one of the elders; NJB: one of the officials.

[2] Prostrated himself by bowing to the ground: The Greek is PROSEKUNEI which means to bow before and kiss the sandals or fringe of the garment. Though the KJV versions uses “worshipped” (which is much misunderstood) others render: MOF: knelt before; DIA: prostrated; NAS: bowed down; WMS: fell on his knees.

[4] Hemorrhage: The Greek is HAIMORROUSA and is variously rendered: KIT: flux of blood; KJV: issue of blood; BECK: flow of blood. Such a thing made anyone who touched her ceremonially unclean. The other accounts relate how she had spent all her money on a cure and was only made worse by the doctors. This poor soul has suffered much for a long time.

[5] Outer-garment: The Greek is HIMATIOU from which English gets “hem.” Her language indicates she must have bowed low to touch the fringe of his garment.

[6] Saved: The Greek is SOTHESOMAI and is also rendered: KJV: whole; RHM: made well; PME: I shall be all right.

[7] That hour: Possibly it would have taken her awhile to note she was no longer bleeding. By then the Nazarene would have been gone into the house of the ruler.

[8] Flutists and the crowd making an uproar: Possibly paid mourners to demonstrate the household’s grief.

[9] Not dead: Perhaps not “clinically” or somatically dead.

[11] Fame: The Greek is PHEME from which “fame” is rooted in English. It has been quite a day with more to come.

[12] Land: The Greek is GEN meaning “earth” with a range of understandings revealed by the context.