Matthew 12:31-32 – The Nazarene’s Commentary: Blasphemy against the Pneuma 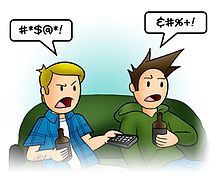 In cartoons and comics, profanity is often depicted by substituting symbols for words (“grawlixes” in the lexicon of cartoonist Mort Walker)

[4] Blasphemy against the Pneuma: Note, the Nazarene says nothing about ‘blasphemy against God.’ How could one sin against Jesus (if he were The God) and not against the holy spirit? Jesus uses Pneuma as the unseen power of God. It is the same as sinning against God Himself. It is abusive speech against God’s way of doing things and those upon whom He has placed His Pneuma. Note the words of the Pharisees: they accuse of Jesus’ work as that of the Devil! Many have pained themselves out of dread they have sin against the spirit. If some so condemn themselves, it is likely they have not sinned so. Those who have blasphemed God have no repentance (Hebrews 6:4ff).

[5] Speaks a word against the Son: Note what comes later about how a person’s words either justify or condemn. Even abusive speech against the Son may be forgiven. Many have used “Jesus Christ” as a profane curse or “swear word.” Jews throughout the age have spoken against Jesus and cursed his name. Even this is forgiven.

[6] Speaks against the Holy Pneuma: Note what the Pharisees have done: they have called someone anointed with the spirit as demonized – under the influence of Satan. The speech is not against the Pneuma directly but that agent of God’s unseen spiritual pressure that accomplishes His will. This is very similar to Matthew 5:22 – addressing a genuine servant of God as an “apostate.” See notes on Matthew 5:22.

[7] Age: The Greek is AIONI. The closest English word is eon, aeon. So the closest would be, “this eon or that to come.” Strong’s Exhaustive Concordance defines it as, 1) for ever, an unbroken age, perpetuity of time, eternity; 2) the worlds, universe; 3) period of time, age. The word occurs many times with a wide range of meaning. Other renderings are: KJV: this world; TCNT: present age; NWT: system of things. There are two ages from Jesus’ standpoint: this one, and the next.