Luke – The Nazarene’s Commentary: Introduction to the Third Gospel

THE GOSPEL OF LUKE

The Third Gospel is assigned by the common voice of the primitive Church to Luke, “the beloved physician” and companion of Paul. Of his earlier history nothing is recorded. There is no proof that he ever saw the Lord or that he became a believer until some time after his death. He was not a Jew, his name is Greek, his style and modes of thought point to Greek training, and it has been generally believed that he was one of “the Grecians who turned to the Lord” in the great commercial city of Antioch where the first Gentile church beyond Palestine was founded. From the incidental references to himself in the Acts we learn that he was the constant companion of the later ministry of the great apostle to the Gentiles, and this is confirmed by the allusions to him in the Epistles. From Colossians 4:14; Philemon 24; 2 Timothy 4:11, we learn that he was a Gentile, a physician, that he remained with Paul in his imprisonment at Cæsarea and attended him to Rome, where he was his companion during his long sufferings

Papyrus 45, a 3rd-century AD Greek papyrus of the Gospel of Luke

The Gospel of Luke differs from the other three in its sources of information. Matthew wrote as an eye witness; Mark probably recalled the recollections of Peter; John recalled his own personal memories of the life and words of the Lord, but Luke draws from the authentic sources of information then accessible, and he carefully presents the results in an orderly narrative. There are reasons for believing that during the period when Paul was a prisoner at Cæsarea, Luke, under his direction, set in order the facts of the Life of Christ in order to furnish an account fitted for the use of Gentile converts, and Gentiles who desired to learn of the Lord.

“As Paul was the apostle, so in a faint degree Gentile Luke was the evangelist, of the Gentiles. He traces the genealogy up, not merely to Abraham, but Adam, the son of God. He makes Christ’s first teachings at Nazareth commemorate the extension of God’s mercy beyond the limits of Israel. Luke 4:16-30. He shows how the sinner is forgiven upon condition of obedient faith. Luke 7:36-50. The publican is, in Paul’s favorite term, justified. Evidently their narrative of the Lord’s Supper is the same tradition. Luke 24:34; 1 Corinthians 15:5.”

Luke’s two books, his Gospels and the Acts, are properly two successive parts of one Christian history; and as the latter terminates at the point where Paul has lived two years at Rome, in the year 64, so the Gospel must have been written before that period, namely during the 27 years after Christ’s death. For as Luke terminates his Acts abruptly with the close of Paul’s two years’ imprisonment, without adding a syllable of that apostle’s later history, it is very certain that the Acts was published at that time. Yet, we know from the preface to Acts that the Gospel had been already written. Thus, it is evident, that it was written 27 years after the crucifixion. [221] [B. W. Johnson The People’s New Testament (1891)]

Notes about this Version and Commentary 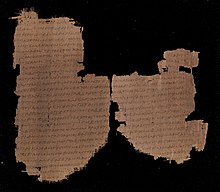 This text of the Gospel of Luke is a new version, the 21st Century Version of the Christian Scriptures [NCMM], as an additional part of Nazarene Commentary 2000©. This rendering by Mark Heber Miller may be considered a literal version with limited paraphrase.

Greek words of particular interest are in CAPS and accompanied by Strong’s Exhaustive Concordance of the Bible code numbers. Cross-references have been checked and added when of special note. Each chapter and paragraph has a topical subject heading and each chapter ends with review questions for congregational or personal studies. Key phrases are compared throughout to other literal and paraphrased versions. Underlined words are sources for research elsewhere in Nazarene Commentary 2000©. Any verse may be located by entering LK1:1, etc., in the Find window, and chapters by entering CHAPTER ONE: etc.

Since Luke often parallels Matthew, when Nazarene Commentary 2000© covers the same material the symbol || will indicate to go to the footnote commentary in Matthew. For more information see similar notes on Mark and John.

Almost all of Mark’s content is found in Matthew, and most of Mark is also found in Luke. Matthew and Luke share a large amount of additional material that is not found in Mark, and each also has a proportion of unique material.

Our Ukrainian brothers and sisters

Luke 1 – The Nazarene’s Commentary: Luke 1:1-4 – A Factual and Logical Statement

Comments on: "Luke – The Nazarene’s Commentary: Introduction to the Third Gospel" (11)