In this chapter we find Matthew attempting to present Jesus as a unique person who is the long-awaited son of David, the Messiah who performed miracles by the power of God. 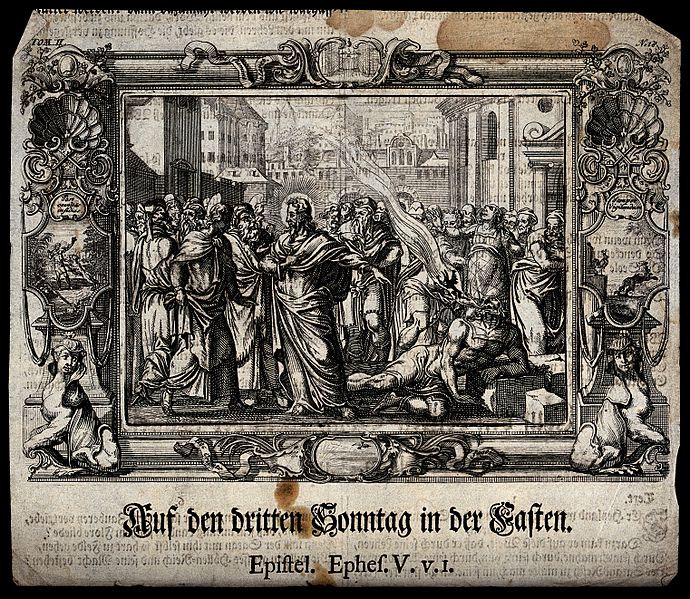 Christ heals a demoniac; a demon is expelled into the air.

In Matthew 4 we came already to read that reports about Jesus circulated as far as Syria and that lots of people wanted to come to see Jesus for his miracles. All sorts of ill people where also brought to Jesus, those faring badly, having a variety of diseases and afflicted with torments, the demon-possessed, the moonstruck and paralytics – so that Jesus could cure them.

Allen Browne in his writing of September 18, 2017 looks at this miracle worker who does not seek people’s approval so he can become their king. Marcus Ampe talking on that subject asks us also to look at Jesus who knows very well his position to be the sent one from God, the heavenly Father Who is greater than Jesus, and without Him Jesus can do nothing.

“Jesus gave them this answer: “I tell you the truth, the Son can do nothing by himself; he can do only what he sees his Father doing, because whatever the Father does the Son also does.” (Joh 5:19 NIV)

Jesus may see himself as the divinely appointed king (like Browne writes), but he is aware that it is God Who gave him this authority to take on that position. In a way, to show his position, so that people could recognise him as the Messiah and future king he uses his regal authority to remove every form of oppression from his people.

Browne asks us to look at Jesus his track record:

Can you imagine how people would be astonished seeing such incredible things?

The crowds marvel at this concerted effort by their anointed king to release God’s people from every form of oppression. They can’t recall ever seeing anything like it. There’s been nothing like this since the exile 600 years ago. They recall the days of Elijah and Elisha when God had done astounding miracles to challenge Israel’s evil rulers like Ahab and Jezebel. They consider the days of Moses when God led them out of Egypt and created them as his nation. No, there had never been such a demonstration of divinely delegated authority: {Do you recognize the king’s authority? (Matthew 9:32-34)}

“Nothing like this has ever been brought to light in Israel.”

In front of them is there that promised one from God, the son of David who would reign over God’s people in every generation (Matthew 9:27; 2 Samuel 7:16). His house and his kingdom was to be made sure forever, his throne established forever. Whilst people yearned for the Son of David to restore the kingdom to Israel (Psalm 89:49; Isaiah 9:7; Ezekiel 37:24). Now the people of Israel have a shepherd in their midst who walked in the ordinances of God. Now they could hear those who got a huge change in their life, even blind people came to “see” what Jesus was doing, and publicly proclaiming him as Israel’s long-awaited king.

The king is present. His authority — his appointment by God as ruler of his people — is evident to everyone.

Well, almost everyone. There are sour grapes:

Matthew 9:34 But the Pharisees were going,

“It’s by the ruler of the demons he casts out demons.”

Later the Pharisees would repeat that it was by “Beelzebub the prince of the devils” Jesus was casting out devils.

“22  Then they brought him a demon-possessed man who was blind and mute, and Jesus healed him, so that he could both talk and see. 23 All the people were astonished and said,

“Could this be the Son of David?”

24 But when the Pharisees heard this, they said,

“It is only by Beelzebub, {Greek Beezeboul or Beelzeboul; also in verse 27 } the prince of demons, that this fellow drives out demons.”

25 Jesus knew their thoughts and said to them

Browne asks us to remember how

the Pharisees were upset with Jesus for hanging around with “sinners,” sharing meals with them (9:9-13). That makes Jesus unclean in their view. How could an unclean person have authority over unclean spirits? Presumably the head of the unclean spirits could tell the spirits where to go, so they figure he must be in league with Satan (9:34).

Why were the Pharisees so blind? Why couldn’t they see what was obvious to everyone else? Jesus is liberating his people from every form or oppression, across such a wide spectrum. How could they miss all the colours of God’s liberating power at work in him, and imagine that he was in league with the enemy that wanted to destroy God’s people?

The Pharisees had a certain authority over the communities of Israel (to the extent that you could say they had authority while under foreign rule). They need to quash Jesus’ authority if they don’t want to yield theirs. They must paint him as a traitor; otherwise they themselves will be seen as traitors for failing to recognize his authority.

This confrontation increases exponentially from this point. On one side stands the king appointed by God. On the other side stand the self-appointed shepherds of Israel. They accused Jesus of siding with God’s enemy, but who are the real traitors who want to bring down God’s appointed king?

The kingdom conflict has begun. Either you recognize Jesus’ authority, or you oppose him. There is no neutral ground.

What others are saying

Without eyes of faith the Pharisees cannot see beyond their parochial experience that God is doing something unique in Israel in the word and work of Jesus. So they gather their opposition to Jesus, both protecting their religious domain and thinking they are protecting the people from Jesus. This is an ominous tone, which tragically sets a trajectory for the cross that will inevitably come.

But perhaps, as this is the final crowd reaction in this anthology of works of power, we should read it as an evaluation not merely of this one exorcism but of the whole range of Jesus’ miracles which these two chapters have set out: others might perform the occasional exorcism, but this man’s ministry of deliverance is on an altogether different scale. A similarly climactic effect, but in an ominously different direction, is achieved by the Pharisees’ accusation. They do not deny Jesus’ power, but question its source. Such a total and offensive repudiation of his authority brings the growing hostility to a new level, and suggests a breach which is now irreparable.

More than just a man with authority of speaking

Matthew 9:27-31 – What others are saying about the blind men recognising the son of David