MT12:22 Then they approached Jesus with a demonized person[1] – blind and mute – and he cured him, so the speechless man spoke[2] and began seeing. MT12:23 And the crowds were beside themselves[3] and were saying, “Is this person not the Son of David?”[4] MT12:24 But when the Pharisees heard this,[5] they said, “This fellow does not exorcise demons save by Beelzebul,[6] the ruler of the demons.” MT12:25 Realizing their thoughts, Jesus told them: “Every kingdom divided against itself will be devastated.[7] Every town or house divided against itself will not remain standing. MT12:26 And so if Satan[8] exorcised Satan he was divided against himself. So, how would his kingdom[9] remain standing? MT12:27 And, if I am exorcising demons by Beelzebul, by whom do your sons[10] exorcise?[11] Therefore, they will be your judges.[12] MT12:28 But, if I exorcise demons by God’s Pneuma,[13] really the Realm of the God has passed you by.[14] MT12:29 Or, how is anyone able to enter a powerful person’s[15] home and grab his [valuable] cups[16] without first binding the powerful person? And only then can his home be pillaged.[17] MT12:30 The person not with me is against me,[18] and the person not assembling with me scatters.[19] 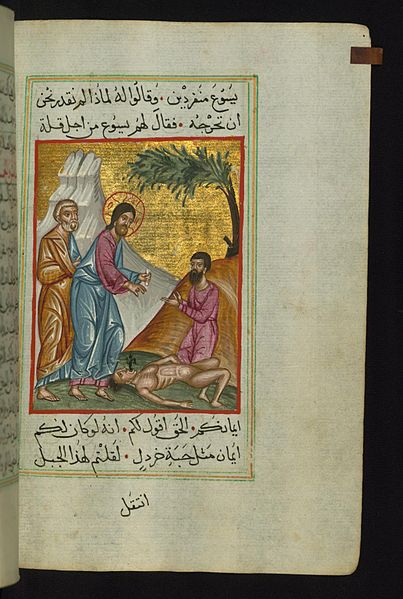 [2] Speechless man spoke: We wonder at his first words.

[3] Beside themselves: Or, KJV: the people were amazed; WMS: dumbfounded; PME: wild with excitement.

[5] Pharisees heard this: The whole incident must drive them wild with hatred: they see the miracle and note the crowd’s reaction. The focus is on the Nazarene and this arouses their jealousy.

[6] Beelzebul: See footnotes on Matthew 10:25. Jesus makes it clear this is a cryptic name for Satan.

[8] Satan: The Jewish clergy have really called Jesus Satan. This is about the worst accusation that can be made against a godly person. It is even beyond “apostate.” See the notes on Matthew 4:10 and 5:22.

[9] His kingdom: Satan has his own kingdom and there are those within the realm of that kingdom. These are those he rules over and who have becomes “sons of the wicked one.” The major characteristic which differentiates the two kingdoms is hatred and love (Matthew 13:38; John 8:44; 1 John 3:10).

[11] Exorcise: Josephus records a case of casting out demons (Antiquities 8. 2. 5). He also reports the Jewish rabbis used a herb or drug Macherus (Wars of the Jews 7. 6. 3). In the Jewish apocryphal book Tobit there is an example of the exorcism of a maiden with whom a wicked demon was in love (Tobit 6:16; 8:1-4).

[12] They will be your judges: It is possible the “they” are the rabbis own “sons” who will critique their master’s words and actions in this accusation. Or, RIEU: you stand condemned by them; NEB: if this is your argument, they themselves will refute you.

[14] Passed you by: Or, KJV: comes unto you; RHM: has come upon you unawares; MOF: reached you already; GDSP: overtaken you; PME: swept over you unawares. As matters develop the Pharisees are in a highly dangerous situation with relation to God and the unforgivable sin: they have called Jesus an apostate and demonized (Matthew 5:22). It is possible, therefore, that their opportunity to become part of the realm of Nazarene profession (the Christian Church) is dim indeed. They may have missed their opportunity (Matthew 23:13, 15, 33).

[17] Home be pillaged: Or, KJV: spoil his house; MON: rob his house; WMS: make a clean sweep of his house; WEY: ransack his house.

[19] Not assembling with me scatters: Or, GDSP: anyone who does not join me in gathering, scatters; BAS: he who does not take part with me in getting people together, is driving them away. The Greek is SYNAGON related to “synagogue.” How does one gather or assemble with Christ?

Asking to come under the Wings of God

In Belgium there is a big problem for those who believe in only one True God. Besides the Jehovah’s Witnesses, there are not so many serious Bible Students living close together. Speaking in Western continental terms, most earnest Bible Students live far apart to meet regularly and attend a service together. With that, it often […]

Trump-era spike in Israeli settlement growth has only begun

Donald Trump was the man who loved to have a say in everything and thought he was the best man to have the world in control. Ex-President Donald Trump, who abandoned decades-long U.S. opposition to the settlements and proposed a Mideast plan that would have allowed Israel to keep them all — even those deep […]

Find happiness in what you have

Originally posted on Dr. Austin Ejaife inspirit:
“Happiness isn’t about getting what you want all the time. It’s about loving what you have and being grateful for what you want.” ~ Zig Ziglar … People tend to choose to see happiness as something we must chase after and capture, as if it is something to…