On April 21 brother Nelson, in the world better known as Prince was lost After the well-known Jehovah witness singer-dancer Michael Jackson the movement lost again a pop star. As an adult superstar musician Prince became a Jehovah’s Witness and went regularly to a place were there was no dance club or a recording studio, were there are not even any musical instruments except for a piano hidden in a closet that no one uses. The walls being of various shades of beige encloses a hall were nothing shines, and nothing is purple. Nothing about it says “Prince.” 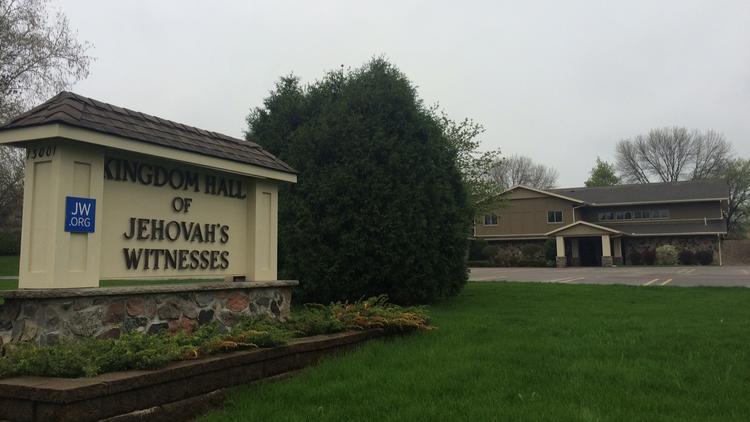 The Kingdom Hall of Jehovah’s Witnesses in Minnetonka, Minn., where Prince was a congregant. (Matt Pearce / Los Angeles Times) Auditorium A in the Kingdom Hall of the St. Louis Park Congregation of Jehovah’s Witnesses was the place were Prince reflected on his life and knew who was the real big superstar of this universe. Prince Rogers Nelson was not celebrated in that hall as Prince, the music megastar, but was like all others a Brother, brother Nelson, the Jehovah’s Witness. Here, one of America‘s greatest sex symbols didn’t arrive in spandex and stilettos but in conservative suits and ties. He was often hard to spot among the congregation of dozens unless you were looking right at him. And that wasn’t the only way he blended in.

Too many people forget that artists and even so called ‘world stars’ or ‘superstars’ also can leave at certain moments the world for what it is. They too can know that there are more important matters in this life and this world than ‘stardom’ in this world or than all the glory people want to give them. They too can know to whom the real glory belongs.

Over the final decade of his life, Prince worshipped at Auditorium A in the Kingdom Hall of the St. Louis Park Congregation of Jehovah’s Witnesses. Also people with fame can have enough wisdom to analyse the Bible and to come to the Biblical truth, willing to put human doctrines aside and preferring to give everything to the Word of God. Like Michael Jackson Prince was a fellow believer in the Jehovah’s Witness tenets: that Jesus was a saviour but was lesser to God, that these are the final days of civilization, that the dead will be resurrected, and that the world will live under a global government lead by Jehovah, a Hebrew name for God. Among the St. Louis Park congregation, Prince wasn’t a celebrity but an equal in faith.

For believers like us, this star was accepted as a brother. Congregant Josephine Parker, 74 said on Sunday April the 24th

“He wasn’t treated as maybe the world would treat him.”

Remembering Prince as a gentle soul and a “mild spirit,” and his death at age 57 braking her heart, she added

“I look forward to the time we can welcome him back on the Earth.”

Lots of things may be said about his life, lots of guesses may be made about his death. No matter how long we’ve made it, no matter our race, our colour, our creed, our sexual orientation, all of those who live in the land of music, will have felt his departure from this world as an earthquake, and for the brothers and sisters it came also as a surprise.

On April 21, 2016 the world lost a great musician. What the world perhaps did not know, that it was also a man with a soul, an inner feeling and a mind who was conscientious about more important things than all the glitter of this world.

Strangely enough for some, his flamboyant stage presence, extravagant dress and make-up, and wide vocal range was put secondary at certain moments of the week. Inducted into the Rock and Roll Hall of Fame in 2004, the first year of his eligibility Rolling Stone ranked Prince at number 27 on its list of 100 Greatest Artists — “the most influential artists of the rock & roll era”, he was humble enough to be a brother like the others in the Christian community of worshippers of the Most High Superstar, Jehovah God.

Kirk Johnson who was also at the scene sent a statement to CNN through his attorney saying in part:

“I greatly respected Prince’s privacy, and ask in turn during this difficult time, others respect the privacy of those who worked with and represented him.”

But fans coming to know Prince was a Witness also started blaming the cause of his death Prince refusing a blood transfusion as a Witness. Those fans and acquaintances who have wondered whether Prince’s religious beliefs may have even contributed to his death, because Jehovah’s Witnesses don’t believe in taking blood transfusions for scriptural reasons, do forget that believers like us accept other and safer medical treatments.

Prince, who was raised as a Seventh-day Adventist, was converted — or at least helped along — by Larry Graham, the former bass player for Sly and the Family Stone.

“I don’t see it really as a conversion,”

“More, you know, it’s a realization. It’s like Morpheus and Neo in ‘The Matrix.’”

Prince embraced the faith and even proselytized his neighbours around his Paisley Park estate in the Minneapolis suburbs, who were sometimes shocked to find the star on their doorsteps.

Lawrence Wright’s 2013 bestseller made in documentary ‘Going Clear: Scientology and the Prison of Belief’