[1] Understand everything: Or, KNX: have you grasped all this; NWT: comprehend. 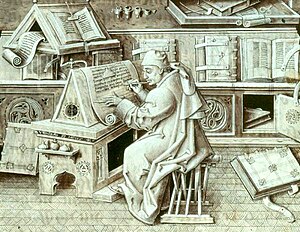 Jean Miélot, a European author and scribe at work

[2] Teacher: The Greek is GRAMMATEUS and is generally rendered “scribe” though some rendered it: TCNT: Teacher; PME: every one who knows the Law. The scribe was considered a teacher as well as a student sometimes. Search the word scribe or scribes.

[3] Become a student: The Greek is MATHETEUTHEIS. Or, TCNT: received instruction; PME: becomes a disciple; NEB: a learner. The perfect teacher is one who is also a life-long student.

[5] Throws out: The Greek is BALOUSIN and is also rendered: NJB: brings out. But, there seems more enthusiasm in the word.

[6] His treasure-chest: The treasure are his own goods, the things he has saved. Jesus has used the word “treasure” in relation to the heart. See the notes on treasure at Matthew 6:21 and Matthew 12:35. As a student or learner (a disciple of Christ) each of these apostles has had truths stored up from the Jewish religion – laws, principles, doctrines, prophecies. Now each ones has new truths and news ways of expressing these from the Master teacher, Jesus.

[7] New things and old things: The New Jerusalem Bible footnote here reads: “The Jewish teacher who becomes a disciple of Christ has at his disposal all the wealth of the Old Testament as well as its completion in the New.” William Barclay writes: “There is something suggestive here. For it means that Jesus never desired or intended that any man [or, woman – editor] should forget all he knew when he came to him; but that he should see his knowledge in a new light and use it in a new service.” (Page 90) No person embarking on discipleship to the Nazarene can refuse to “throw out” in personal witnessing to others truths old and new.

Matthew 12:38-42 – The Nazarene’s Commentary: Signs in Jonah and the Queen of the South

Matthew 13:1-9 – The Nazarene’s Commentary: Parable: the Soil and the Seed

Matthew 13:18-23 – The Nazarene’s Commentary: Parable of the Seed and Soil

Matthew 13:24-30 – The Nazarene’s Commentary: Parable of the Field and the Harvest

Matthew 13:31-32 – The Nazarene’s Commentary: Parable of the Mustard Seed

Matthew 13:33 – The Nazarene’s Commentary: Parable of the Fermented Whole

Matthew 13:36-43 – The Nazarene’s Commentary: Parable of the Zizania in the Field Explained

Matthew 13:44 – The Nazarene’s Commentary: Parable of the Treasure

Matthew 13:45-46 – The Nazarene’s Commentary: Parable of the Valuable Pearl

Matthew 13:47-50 – The Nazarene’s Commentary: Parable of the Dragnet

Matthew 13:24-30 – The Nazarene’s Commentary: Parable of the Field and the Harvest

MT13:24 Another parable Jesus put before them, saying, “The Realm of Heaven[1] may be compared to[2] a man sowing good seed in his field. MT13:25 But, while men were sleeping his enemy arrived and over-seeded zizania[3] among the wheat and then left. MT13:26 Now when the [wheat] sprouted and produced fruitage there also appeared the zizania. MT13:27 So, the slaves approached the landlord[4] and asked him, ‘Master, did you not sow good seed in your field?’ MT13:28 The landlord answered them, ‘An enemy did this.’ The slaves asked, ‘Do you want us to go and cull-out[5] the zizania?’ MT13:29 But, the landlord told them, ‘No, for by accident while culling the zizania you uproot the wheat also.[6] MT13:30 Go and let both of them grow together until the harvest. Then in the harvest season I will tell the harvesters,[7] “Gather first the zizania and bind them into bundles to be burned. But, the wheat gather into my storehouse.”’”[8]

[1] Realm of Heaven: Not the seat of government, but the realm or domain over which the King reigns: the realm of profession – the Church. See notes on Matthew 10:9 and Matthew 13:11. Research the word group kingdom.

[2] May be compared to: Or, KJV: is likened unto. Jesus is to use several parables to illustrate truths or mysteries about the Congregation (or, Church) he is to build (Matthew 16:18). Compare Ephesians 1:19-22 and Colossians 1:13. The Nazarene is to explain this parable a bit later. So see details in Matthew 13:36-43.

[3] Zizania: Generally this plant (Lolium temulentum) is called either tares or the “bearded darnel.” (KJV) Or, MOF: weeds. When young it resembles wheat but with maturity it turns black and stands up straight, while wheat is golden and bows its head (See Bible dictionaries). William Barclay observes: “The tares and the wheat are so like each other that the Jews called the tares bastard wheat. The Hebrew for tares is zunim, whence comes the Greek ZIZANION; zunim is said to be connected with the word zanah, which means to commit fornication.”

[6] For by accident while culling the zizania you uproot the wheat also: KJV: lest while ye gather up the tares, ye root up also the wheat with them.

Matthew 13:1-9 – The Nazarene’s Commentary: Parable: the Soil and the Seed

Matthew 13:18-23 – The Nazarene’s Commentary: Parable of the Seed and Soil

Hosting a Virtual Seder During a Pandemic

Isolation may not be an excuse to have no virtual contact with others and to share the feeling of remembrance what God has done and does for us. Perhaps you too can think of having a virutal sedermeal and making this upcoming 14 Nisan also one to remember.

Originally posted on writing to freedom:
Recrafting our World It’s impossible to avoid the news and impact of coronavirus. I’ve progressed from denial to concern, to acceptance and opening to new ideas. I’ve been sick for the last few days wondering if I have the virus, flu, a cold, allergies, or am simply run down.…

Love in the Time of Corona

Originally posted on Green Life Blue Water:
It’s been a hell of a few weeks and it looks like it will continue for a bit.  At the risk of sounding both blasé and alarmist at once, I think the planet is trying to tell us something. We are on the verge of a sixth mass…